Occam's razor (or Ockham's razor)often expressed in Latin as the lex parsimoniae, translating to law of parsimony, law of economy or law of succinctness, is a principle that generally recommends, when faced with competing hypotheses that are equal in other respects, selecting the one that makes the fewest new assumptions.

The principle is often inaccurately summarized as "the simplest explanation is most likely the correct one." This summary is misleading since in practice the principle is actually focused on shifting the burden of proof in discussions. That is, the razor is a principle that suggests we should tend towards simpler theories (see justifications section below) until we can trade some simplicity for increased explanatory power. Contrary to the popular summary, the simplest available theory is sometimes a less accurate explanation. Philosophers also add that the exact meaning of "simplest" can be nuanced in the first place.

While many criticized the admittedly dangerous features of C (dangling pointers, unbounded array copies, promiscuous data type casting, and so on), it became popular in part because it was a no-holds-barred type of language, and allowed the programmer free reign to pursue all sorts of mischief -- both good and bad. That reflected the US software culture of the times.

http://www.hpcwire.com/hpcwire/2011-10-13/another_computer_legend_passes_into_the_history_books.html
Posted by jf at Friday, October 14, 2011 No comments: 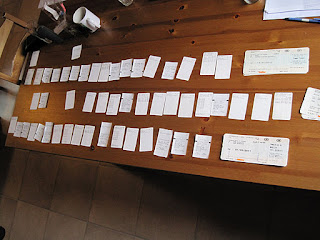 Bookmarlet for the new delicious on ipad

Delicious has changed a lot last week. Too much...

If you are looking for a bookmarklet for delicious on your ipad, here
is what I use: